The S&P 500 Index rallied yet again in August, its seventh consecutive monthly gain. On the last day of the month, the index registered a new record high of 4,523, its 53rd record high of the year. Indeed, with an eight month gain of 21.6%, the S&P is on the way to one of its best years in the last half century. This impressive streak has been coupled with minimal volatility: the largest drawdown so far this year was just -4%.1 (The 50- year average is -14%.)1 Foreign large cap stocks have also performed well, rising 12% for the year. U.S. high yield corporate bonds, which are 4.5% higher for the year, also benefited from the increased appetite for risk. High yield spreads closed the month at just 288 basis points, near a record low. Indeed, across every major credit category, spreads are either at or near their all-time lows. On the other hand, safe haven investments have suffered. U.S. intermediate-term bonds, intermediate-term municipal bonds, and gold all declined in August, albeit less than 1%.

Looking at the stock market’s gains since the pandemic lows, the current bull market sits comfortably at the top of the list of most remarkable in the post-War era.2 But with the sizable gains comes rising risks. An almost eerie calm – along with substantially higher valuations of all assets – hides pressures building under the surface. 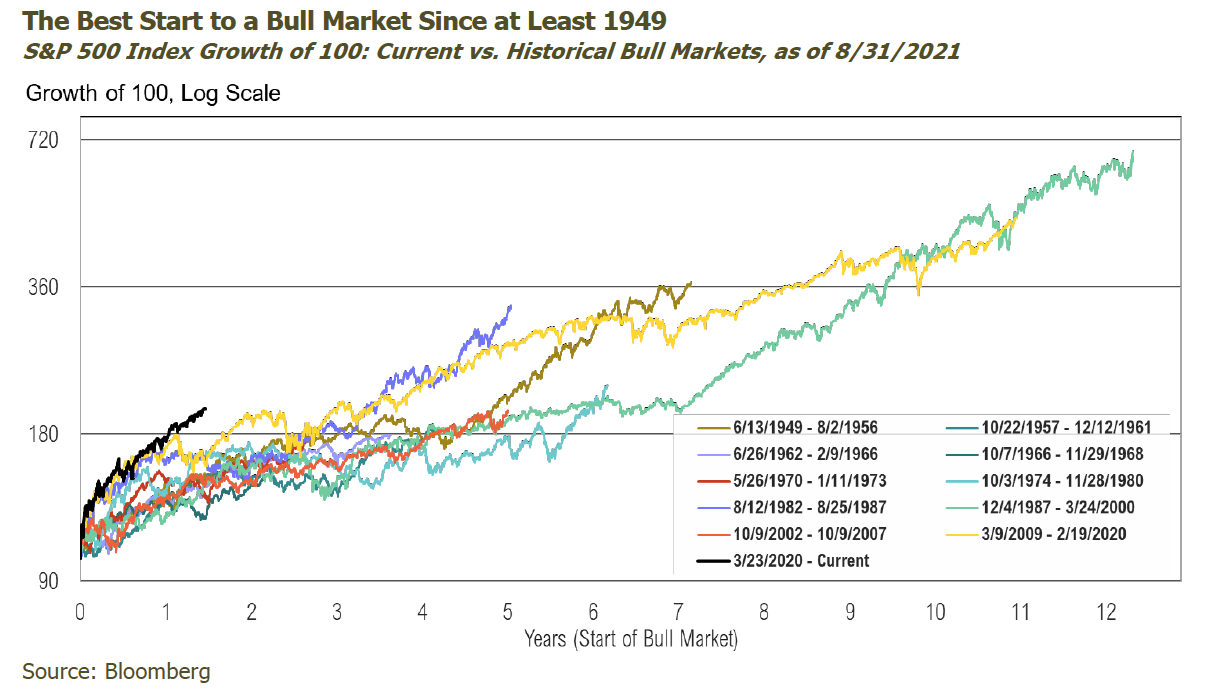 These gains were not without reason. The economy and labor market have improved, corporate earnings have grown, and the vaccine rollout has been robust.3 But more notable than all of these factors is the massive amount of fiscal spending, largely funded by the Federal Reserve’s continued bond buying. As such, investors are on the lookout for signs the support may be reduced. For instance, after months of exceptional labor market gains, a good, but weaker-than-expected, round of August payrolls (released on September 3rd) softened expectations for any tapering of Fed bond buying.4

On August 27, 2021, Fed Chairman Jerome Powell shared his keynote comments at the Federal Reserve’s virtual Jackson Hole Economic Symposium.5 In a speech reminiscent of the Greenspan era, Powell spoke a lot without saying much at all. His comments included enough hawkish language to suggest the Fed was paying attention to growing inflation pressures, but he also indicated that the recent jump in inflation was transitory.

“The spike in inflation is so far largely the product of a relatively narrow group of goods and services that have been directly affected by the pandemic and the reopening of the economy… we expect the inflation effects of these increases to be transitory.” 5

Powell also suggested the Fed may taper bond purchases later this year, while simultaneously emphasizing that the labor market was far from healed, implying substantial further support would be needed.

"[I]f the economy evolved broadly as anticipated, it could be appropriate to start reducing the pace of asset purchases this year."5

“The unemployment rate has declined to 5.4%, a post-pandemic low, but is still much too high, and the reported rate understates the amount of labor market slack. Long-term unemployment remains elevated, and the recovery in labor force participation has lagged well behind the rest of the labor market, as it has in past recoveries.”5

Finally, Powell appeared to solidify the Fed’s relatively dovish bias, as he laid out the risks of removing monetary support too soon.

“Indeed, responding [reducing support] may do more harm than good, particularly in an era where policy rates are much closer to the effective lower bound even in good times. The main influence of monetary policy on inflation can come after a lag of a year or more. If a central bank tightens policy in response to factors that turn out to be temporary, the main policy effects are likely to arrive after the need has passed. The ill-timed policy move unnecessarily slows hiring and other economic activity and pushes inflation lower than desired. Today, with substantial slack remaining in the labor market and the pandemic continuing, such a mistake could be particularly harmful. We know that extended periods of unemployment can mean lasting harm to workers and to the productive capacity of the economy”5

The U.S. dollar declined by almost half a percent on Powell’s comments, confirming his dovish stance and suggesting the market had expected more clarity on when support would be withdrawn. Regardless of what was said, the Fed continued, at pace, with their bond buying program. For the four weeks ending August 25th, the Fed purchased an additional $111 billion worth of bonds, bringing their balance sheet to well over $8.3 trillion.6 And while the Fed may be confident that inflation is transitory, consumers are more skeptical. A Conference Board survey of consumer confidence for August showed that consumer inflation expectations over the next 12 months had increased to 6.8%, a 10-year high.7 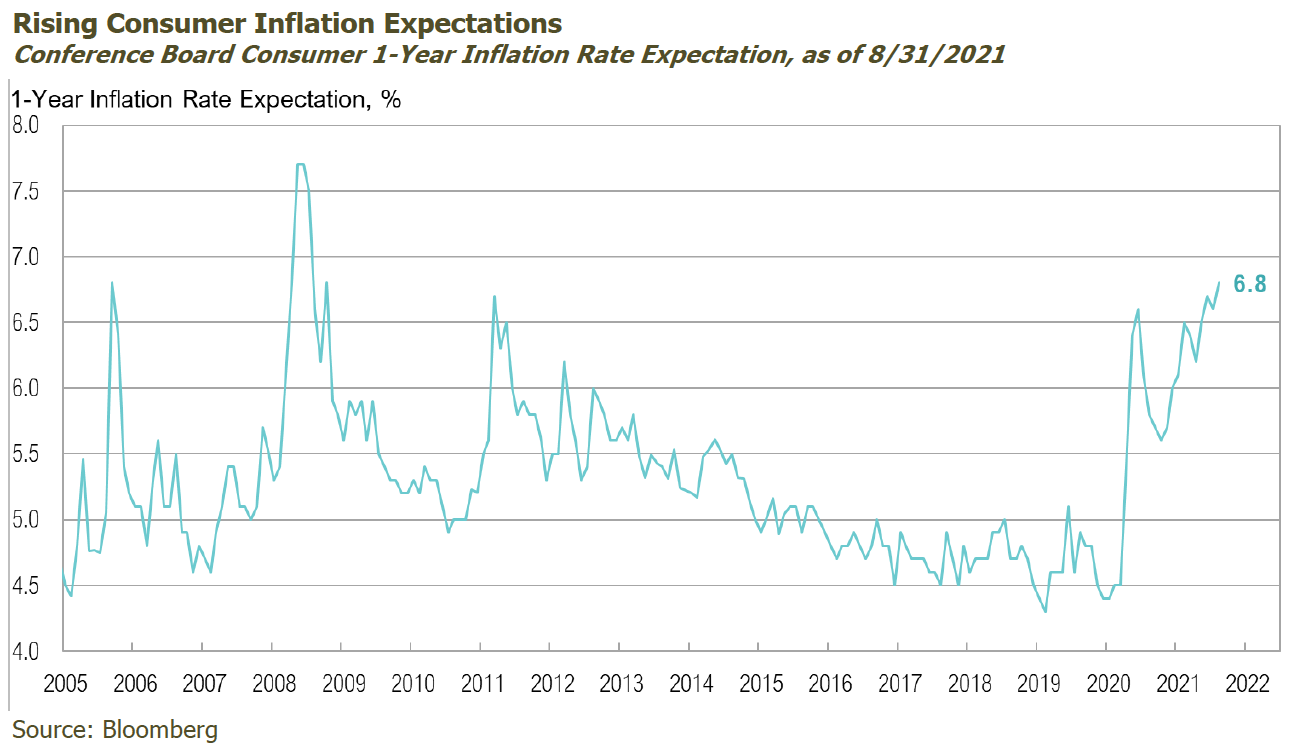 While U.S. and developed countries’ equity markets have been remarkably stable in 2021, Chinese markets sold off 32% from February 17th to August 20th, amid the latest round of regulatory reform by the Chinese Communist Party (CCP). The crackdown began with the cancellation of Chinese financial giant Ant Group’s IPO, scheduled to take place in November 2020.8 Valued at over $300 billion, the company was expected to overtake oil giant Saudi Aramco as the world’s largest initial public listing.9 However, after Ant Group founder and Alibaba CEO Jack Ma apparently disparaged Chinese banking regulations,8 the CCP introduced more stringent lending laws, which hurt Ant’s lending and credit business and therefore threatened nearly 40% of the company’s revenue.9 Ant subsequently decided to postpone its listing, amid what would have been a much lower valuation for a substantially altered business. In addition, the CCP launched an anti-trust investigation into e-commerce giant Alibaba, resulting in a record $2.8 billion fine, a direct retaliation by the CCP against Ma.10 In an even stranger turn of events, the normally charismatic Jack Ma disappeared from the public eye without much explanation. Some even speculated the Chinese government had taken him hostage, until he reappeared three months later.11

This isn’t the first time the Chinese government has increased corporate regulations. Historically, it has done so to push companies to serve the CCP’s economic, social, and national-security concerns.10 Since Ant’s failed IPO, the CCP has announced and implemented several new regulatory measures, including:

Setting aside these policies’ attempts at social engineering, they represented new and unexpected rules, costs, and uncertainty for markets, wiping out over $1 trillion in market value in just a few months, and there is fear that more regulation is coming.16 Chinese tech companies have been popular investments in international portfolios over the last decade, despite a Chinese law that forbids them to list on foreign exchanges.17 To circumnavigate the law, these firms set up structures called Variable Interest Entities (VIEs), offshore shell companies that enable mainland Chinese firms to list in overseas markets and attract international capital. Some analysts speculate that the CCP will crackdown on this activity, cutting off international investment and triggering massive capital outflows, which would permanently impair the value of these firms.18 As a result, Chinese companies that are organized as VIEs have been hit the hardest. Among these firms are Tencent and Alibaba, down 38% and 47% from their respective highs. 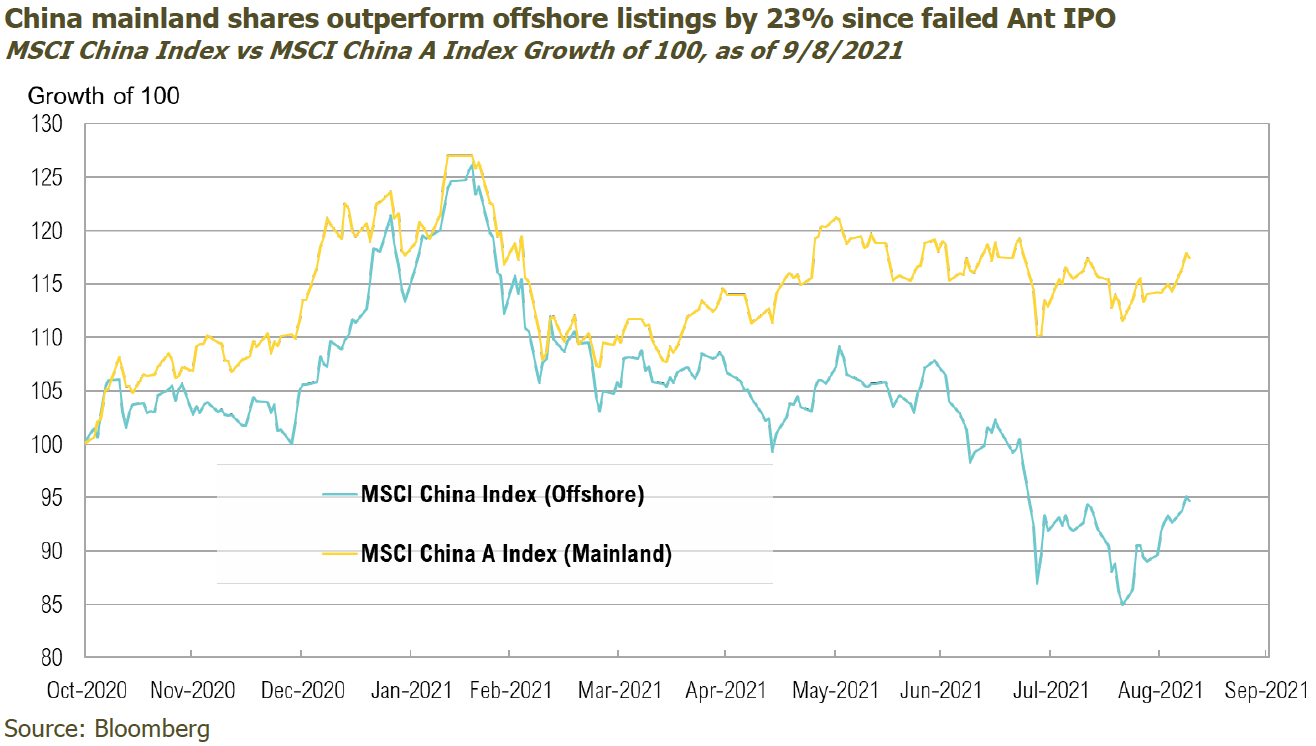 Record-high equity prices reflect fundamental improvement in the economy and earnings backdrop. That said, part of this improvement has unquestionably been driven by massive amounts of stimulus pumped into the economy and markets. Investors are right, therefore, to focus on the Fed and when it might withdraw support. Recent comments from Fed Chairman Powell suggest the Fed currently favors more, rather than less, support.

But there is an additional element of the policy backdrop that also needs to be watched. The U.S. Treasury endedAugust with an operating cash balance of just $356 billion, down from almost $1.8 trillion at the start of the year.19 At the beginning of August, the Treasury expected to need to issue almost $1.4 trillion of debt in the back half of the year.20 This assumption was based on known expenditures and a presumed increase in the debt limit, which is yet to occur.20 As it stands, Treasury estimates it will run out of operating cash around the middle of October 2021.21 Assuming that Congress is able to find a way to raise the debt ceiling, this could lead to a dramatic increase in debt issuance, which has the potential to put upwards pressure on bond yields.

At RMB, we continue to recommend maintaining diversified portfolios of investments that have the potential to perform well in a broad range of market outcomes. The uncertainty around global economic impacts of the continued increase in the number of COVID cases due to the Delta variant around the world could increase volatility in coming months and corrections in equity markets are possible. Given this, RMB believes now is a good time for investors to evaluate risk exposures in portfolios. One way for investors to respond in light of these market considerations is to maintain long-term asset allocation targets to stocks and bonds, but to reduce risk within these allocations. As we have mentioned in prior commentaries, this can be accomplished through reduced allocations to opportunistic fixed income securities within the fixed income allocation or shifting equity allocations to favor less-volatile sectors of the equity market, like U.S. large cap. While remaining cognizant of the increasing risks, we continue to focus on balancing opportunities in the current environment and taking advantage of niche markets that present attractive risk/reward opportunities.

1 Drawdown data is based on monthly total returns sourced from Bloomberg.

5 Federal Reserve Board of Governors: https://www.federalreserve.gov/newsevents/speech/powell20210827a.htm

20 U.S. Department of the Treasury: https://home.treasury.gov/news/press-releases/jy0302

The opinions and analyses expressed in this newsletter are based on RMB Capital Management, LLC’s (“RMB Capital”) research and professional experience, and are expressed as of the date of our mailing of this newsletter. Certain information expressed represents an assessment at a specific point in time and is not intended to be a forecast or guarantee of future results, nor is it intended to speak to any future time periods. RMB Capital makes no warranty or representation, express or implied, nor does RMB Capital accept any liability, with respect to the information and data set forth herein, and RMB Capital specifically disclaims any duty to update any of the information and data contained in this newsletter. The information and data in this newsletter does not constitute legal, tax, accounting, investment or other professional advice. Returns are presented net of fees. An investment cannot be made directly in an index. The index data assumes reinvestment of all income and does not bear fees, taxes, or transaction costs. The investment strategy and types of securities held by the comparison index may be substantially different from the investment strategy and types of securities held by your account. The S&P 500 Index is widely regarded as the best single gauge of the U.S equity market. It includes 500 leading companies in leading industries of the U.S economy. The S&P 500 focuses on the large cap segment of the market and covers 75% of U.S. equities. The MSCI China Index is constructed based on the integrated China equity universe included in the MSCI Emerging Markets Index, providing a standardized definition of the China equity opportunity set. The index aims to represent the performance of large- and mid-cap segments with H shares, B shares, red chips, P chips and foreign listings (e.g., ADRs) of Chinese stocks. The MSCI China A Index measures large and mid-cap representation across China securities listed on the Shanghai and Shenzhen exchanges. The index covers only those securities that are accessible through "Stock Connect". The index is designed for international investors and is calculated using China A Stock Connect listings based on the offshore RMB exchange rate (CNH). 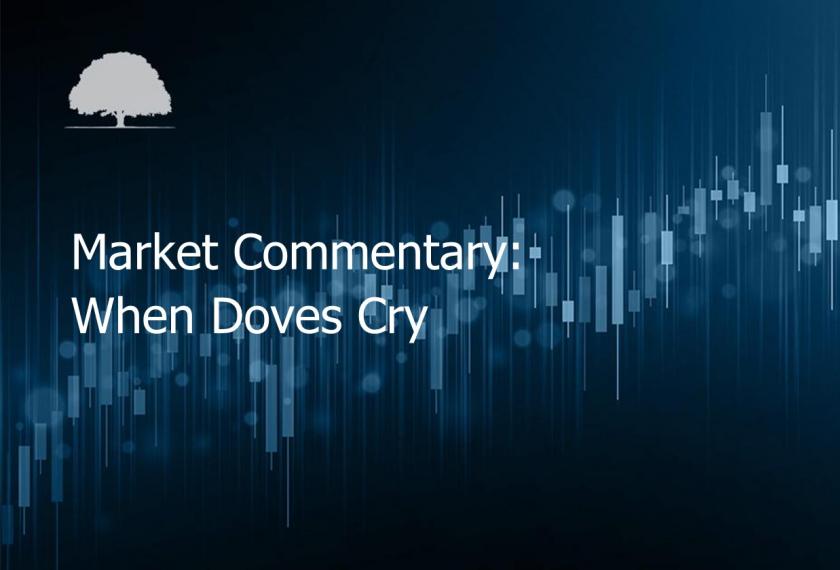 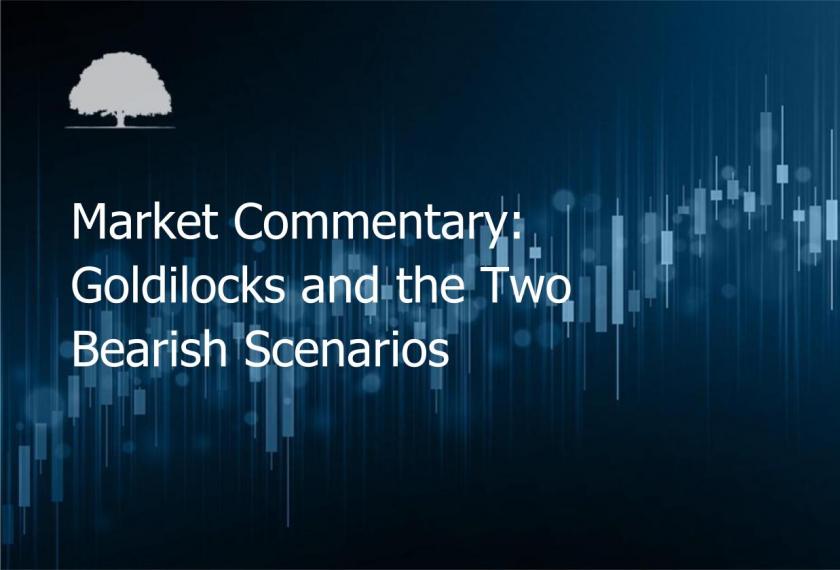 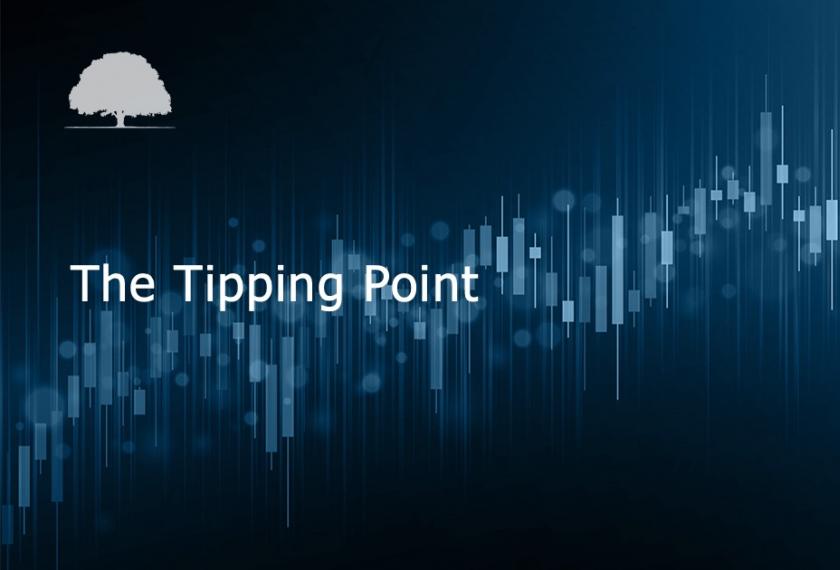