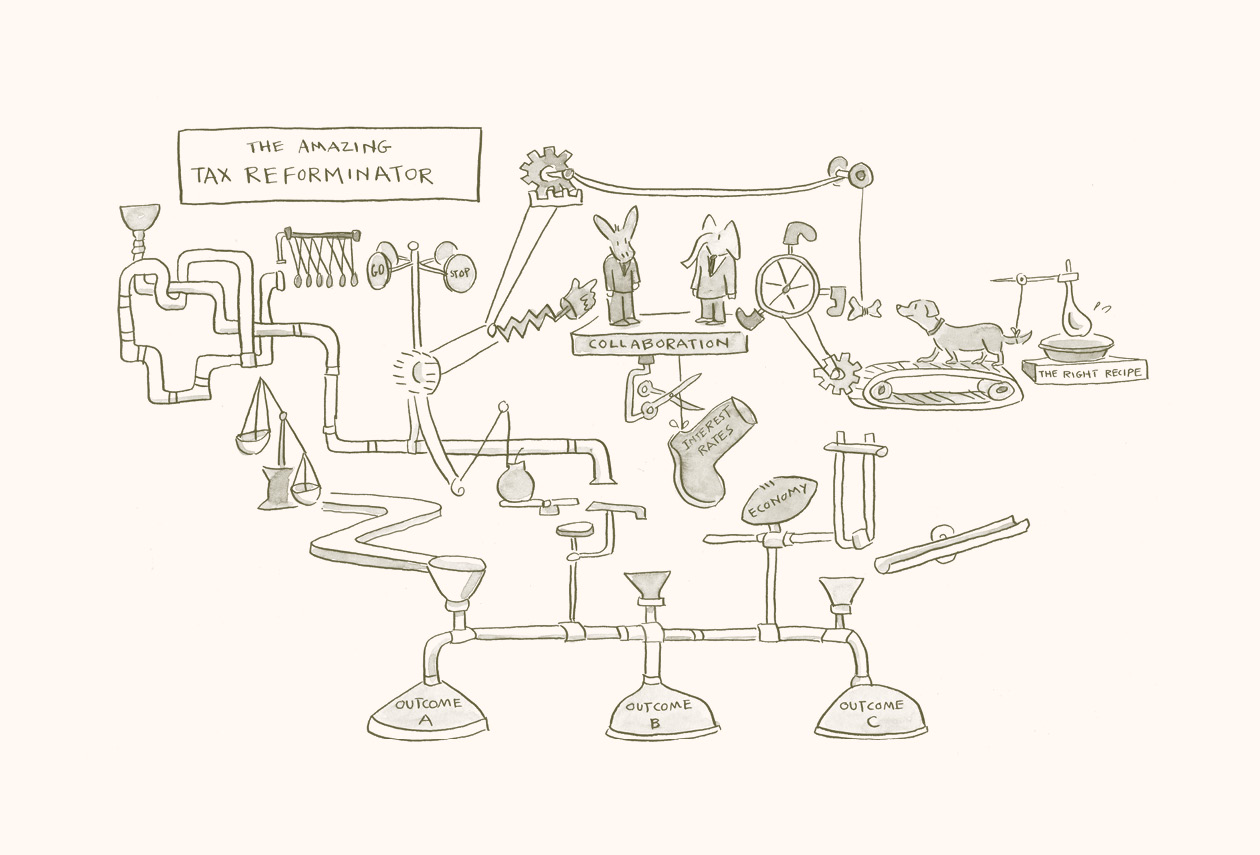 During his election campaign, President Trump highlighted a number of key policy initiatives that would be the focus of his administration. These included the repeal and replacement of the Affordable Care Act (ACA), a tougher stance on immigration, and tax relief for middle-class Americans. In its first 100 days, the Trump administration was unsuccessful with overhauling the ACA but was able to get a related bill passed by the House of Representatives shortly thereafter. Tax reform is next on the agenda, but many unknowns remain about the president’s plan and how it may affect the budget and the national deficit. In this article, we will provide perspective on potential outcomes related to the Trump administration’s tax policy. We will discuss with historical reference other recent tax reforms and tax cuts and how those affected the United States economy. The end result of tax policy remains vastly unknown, as there are many moving parts that need to be resolved before a clearer picture emerges in the latter half of 2017.

The most optimistic and economically beneficial scenario for tax policy would be a reform of the current tax code in the United States. A well-funded tax reform would impact both corporate and individual tax codes and be budget and deficit neutral. The last time there was extensive tax reform in the United States was under the Reagan administration, when two different tax reform bills were passed. The first – the Economic Recovery Act of 1981 – aimed to encourage growth by reducing individual income tax rates and providing incentives for individual savings. However, despite these efforts to stimulate the economy, the deficit increased significantly, interest rates rose over the following 12 months to more than 20%, and the economy fell back into recession. As a result of the downturn, the Economic Recovery Act of 1981 was viewed as unsuccessful, and much of it was reversed in 1982. Four years later, Congress passed the second of the Reagan-era tax reforms: the Tax Reform of 1986. This bill aimed to simplify the income tax code, broaden the tax base, and eliminate many tax shelters while remaining tax-revenue neutral. This bill shifted much of the tax burden from individuals to corporations by eliminating investment tax credits, slowing the depreciation of assets, and enacting an alternative minimum tax on corporations. The Tax Reform of 1986 was considered successful, as it accomplished a number of tax-saving initiatives for individuals while avoiding an increase to the budget deficit. As history shows, the success of tax reform lies primarily in how it is funded and its effect on the budget and national deficit, which will be a key issue for the current administration to handle. The initial plan laid out by the House Republicans in mid-2016 was more deficit neutral than the one released by President Trump in late April. Even with the subsequent adjustments Trump made to his plan as of this writing, it remains a large tax cut that is unlikely to get through Congress.

Another scenario for tax policy would be tax cuts rather than tax code reform. Tax cuts are generally short-term boosts for the economy, but because they are easily reversible and typically increase the budget deficit, they are less likely to create a long-term effect. As the most recent example, the George W. Bush administration implemented tax cuts in 2001 and 2003. The first cuts, known as the Economic Growth and Tax Relief Reconciliation Act of 2001, lowered tax rates, simplified retirement- and qualified-plan rules, and made significant changes to estate tax policy. The changes were implemented in phases and were finite, with all set to expire in 2010. In 2003, the Jobs and Growth Tax Relief Reconciliation Act accelerated some of the 2001 tax changes, increased the exemption amount for the individual alternative minimum tax, and lowered the tax rates on income from dividends and capital gains. In December 2010, President Obama announced that a compromise tax package had been reached – temporarily extending the Bush tax cuts for two more years. The package became known as the Tax Relief, Unemployment Insurance Reauthorization, and Job Creation Act of 2010. Many of the tax cuts enacted in these three bills were reinstated with the signing of the American Taxpayer Relief Act of 2012, which remains in place today.

As evidenced by the flurry of tax-related legislation since 2001, tax cuts require much more maintenance in order to continue their effectiveness. The Bush tax cuts were passed using reconciliation procedures, which meant that they could not last for more than one budget cycle (10 years).

They were generally seen as successful at helping the economic recovery and improving employment rates in the early 2000s; however, they also significantly contributed to the deficit increase over that time. The plans initially laid out by both House Republicans and the White House are based more on tax reform rather than simply lowering tax rates. But in order to get a bill through Congress, compromises will likely be required and a tax-cut scenario could be the ultimate outcome. 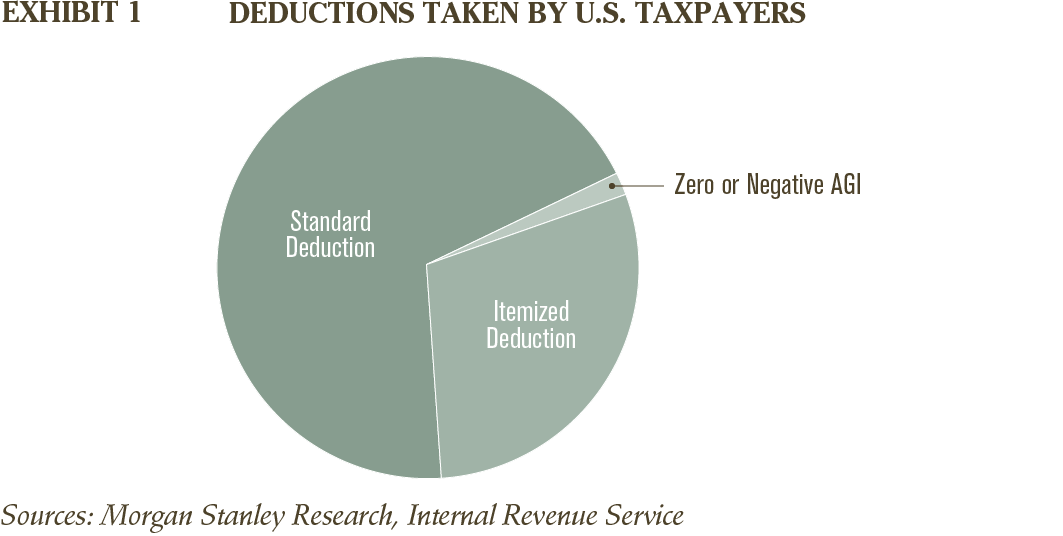 The initial plans proposed by House Republicans and President Trump are a starting point for discussions and are unlikely to garner Democratic support in either the House or the Senate. According to some investment industry experts, “personal tax breaks appear to favor the middle class by some measures (doubling the standard deduction), but the wealthy and high-income earners by others (potential absolute dollar benefit of rate cuts, estate tax elimination)”1 (Exhibits 1 and 2).

Both plans propose consolidating to three tax brackets with lower rates, doubling the standard deduction, and repealing itemized deductions except for mortgage interest and charitable gifts. The plans differ in how corporations would be taxed. With either plan, the deficit as a percentage of GDP is projected to grow by 4-8% over the next 10 years.2 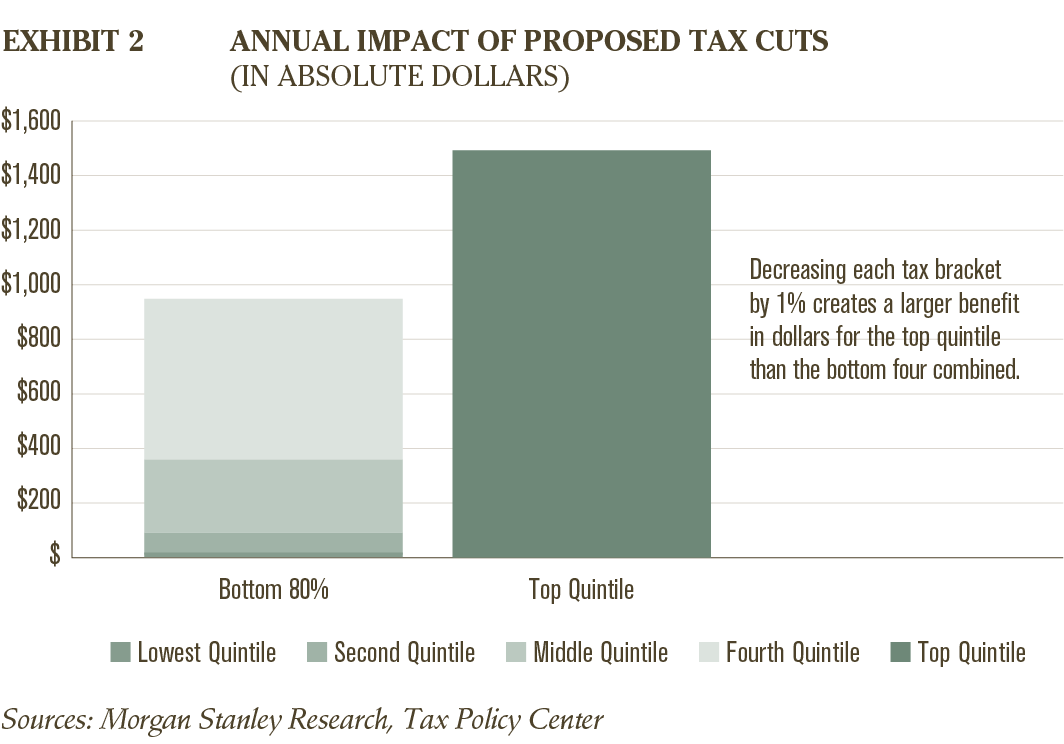 Key content details will continue to emerge from both the House and Trump plans over the coming months. Unless the Republicans and/or the White House can outline a credible bipartisan plan, the prospect of true, meaningful tax reform remains unlikely. The benefits for investors in a tax-cut scenario are limited, and the market appears to be pricing in a tax-cut scenario rather than a tax-reform scenario. As long as health care remains a primary focus, it is unlikely that a tax bill will get written and passed through either the House or the Senate. The probability of the tax bill being delayed into late 2017 or early 2018 continues to increase. A number of key questions need to be answered in Washington before they can move forward with a tax bill, and Americans will be anxiously awaiting more clarity in the coming months. 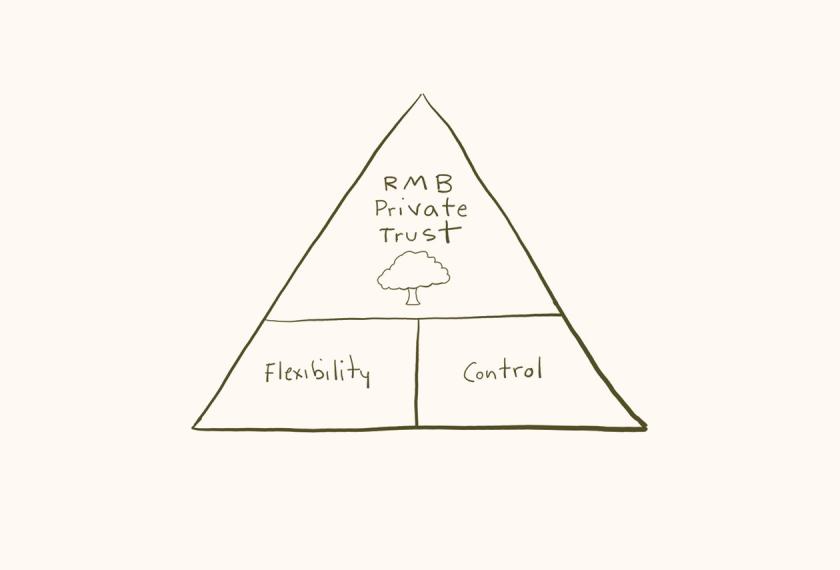 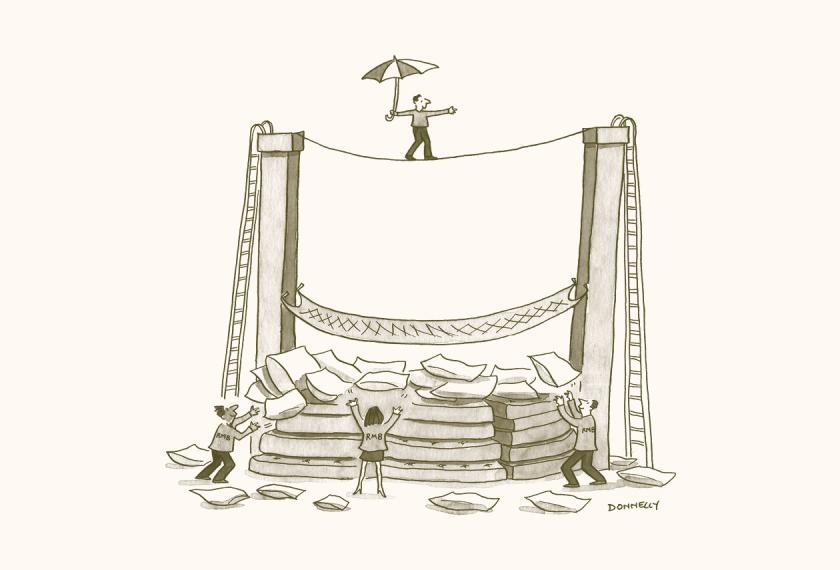 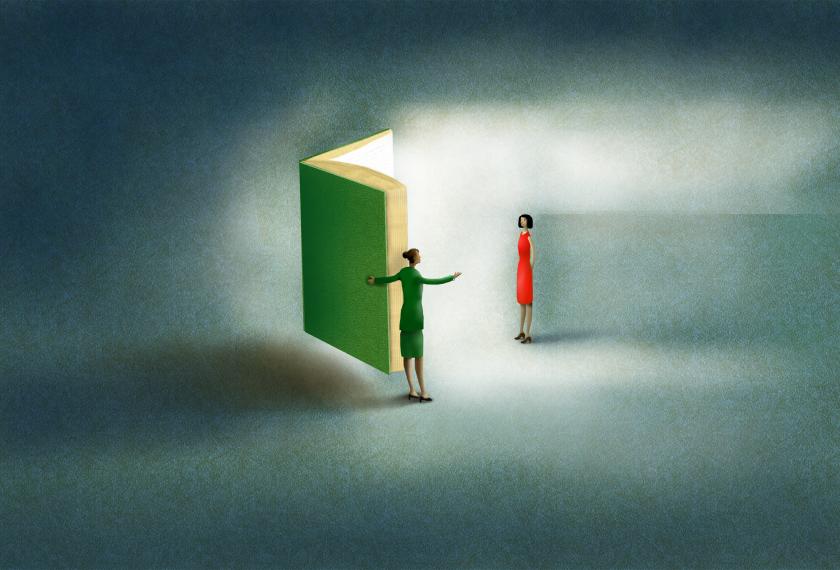