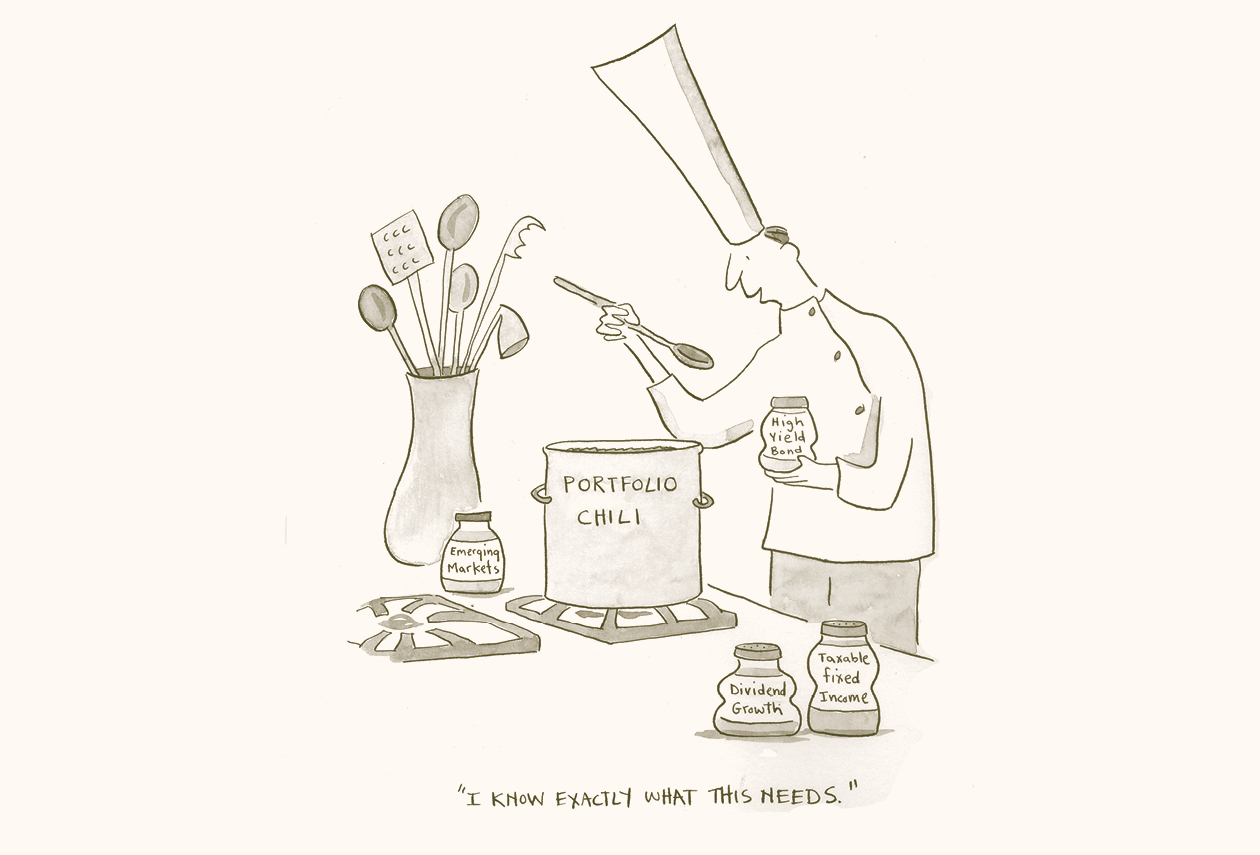 Today as much as ever, investors face an uphill climb. After recessions, the economy typically experiences sharp rebounds in growth. The U.S. is emerging from the largest financial crisis since the Great Depression. However, over the last two years, GDP growth has averaged just 2.1% compared to a long-term average of 3.3%1—hardly a robust recovery. The weak economic rebound, coupled with extreme geopolitical and regulatory uncertainty, has led to elevated volatility in the stock market. Over the last four years, the standard deviation (a measure of volatility) of the S&P 500 was 19%, compared to a long-term average of 14%.2 Adding to the difficulty in finding attractive investment opportunities, interest rates are at historic lows, leading to lower expected returns in traditional bond sectors. This confluence of events, however, creates an environment in which high-yield bonds may be appealing. While investing in high-yield comes with significant risks, based on current valuations and relative to other investment options, high-yield can be an attractive investment option for certain investors.

High-yield bonds, which were often referred to as “junk bonds” until the investment industry decided to clean up their image, are bonds rated below investment grade (BB+ or lower). The issuers of high-yield bonds are companies that have less-than-sterling balance sheets, declining business prospects, or are otherwise experiencing some type of stress. High-yield bonds are issued by companies across a variety of industries and for differing lengths of maturity, with an average maturity of about seven years.3 And because of their lower credit quality, high-yield bonds must pay a high rate of interest to entice investors to purchase them.

Michael Milken is considered the godfather of the high-yield market. Before the 1970s, lower quality companies were largely cut off from the capital markets and were forced to borrow through private placements and other more expensive channels. Milken and his firm, Drexel Burnham Lambert, created a market for high-yield bonds in the ’70s and ’80s when they realized lower quality companies’ risk was typically mispriced. In other words, the companies were forced to pay more than sufficient interest to compensate for their  increased risk of default. This led to a boom in high-yield issuance and easier capital raising for below-investment-grade companies. It also led to a boom and eventual bust in the leveraged buyout market. Junk bonds got a bad reputation due to the excesses of the ’80s, but over the last 30 years, the market has matured and today may offer a compelling return to the right investor.

The return on a high-yield bond is based on the yield at the time of purchase, less any losses due to a default. The bond’s price can fluctuate based on changes to interest rates and spreads over the period of ownership. The yield on the bond represents how much interest the bond pays relative to its price. As interest rates change, so does the price of the bond—when market interest rates go up, bond prices go down, and vice versa. Yields are also considered relative to Treasuries, known as “spread.” The theory is that Treasuries are a risk-free asset, so investors in high-yield must be paid a rate over Treasuries to compensate them for the increased risk they bear. When spreads are wide, high-yield bonds look cheaper, and when spreads are narrow, they look more expensive.

As of May 31, 2012, high-yield bonds yielded 8.2%, significantly lower than their 25-year average of 11%.4 This lower-than-normal yield can mainly be explained by today’s low-interest-rate environment. Though no one knows when, interest rates are expected to rise at some point in the future, generally a negative for bond prices. High-yield has traditionally outperformed most other bond sectors in rising-rate environments for two reasons. First, high-yield bonds’ higher interest payments help to compensate for the loss in price that occurs when rates rise. Second, rising rates are often a signal the economy is improving, a good sign for high-yield bonds since the companies’ businesses, and therefore their ability to repay the bonds, often improves along with the economy.

As of May 31, 2012, the spread on high-yield bonds was 6.7%, cheaper than the long-term average spread of 5.3%.5 There is a good case for spreads to tighten from where they are today. Despite the difficult economic environment, corporate America is quite healthy. One measure of that is the amount of cash companies have on their balance sheets, which today is higher than it has been in more than 30 years. High-yield companies have also taken advantage of the low-interest-rate environment to roll over their debt, meaning most companies won’t have to pay back their bonds for many years, giving them time to improve their businesses. These factors lead analysts to forecast default rates for high-yield bonds at only 1-2% over the next year, less than half the long-term average default rate of about 4.3%.6

Over the last 25 years, the average annualized return on high-yield bonds has been 8.6%.7 With a yield today of 8.2% and room for spread tightening, one could reasonably expect a similar return today. However, it is important to recognize that an investment in high-yield comes with risk. Performance of high-yield is more volatile than performance for higher quality corporate bonds, as indicated by high-yield’s standard deviation of 9%, versus 6.4%8 for investment grade. And when high-yield bonds default, owners typically only recover about 40%9 of their value, a very significant loss for an investment in fixed income, in which one normally expects a full return of principal. High-yield has also been a very popular asset class—$25 billion flowed into high-yield mutual funds over the last six months10—meaning that if investors become fickle and begin pulling their money out, high-yield performance could be negatively affected.

In markets like today’s, characterized by low growth and low interest rates, high-yield bonds may offer a good solution for investors who seek returns greater than what is available in higher-quality bonds, but who don’t want to take on additional equity risk. Spreads are slightly wider than normal, making high-yield look attractively valued relative to its own historical valuations. And yields are higher than most other investment options. An investment in high-yield can play an important role in the intermediate- to long-term investor’s portfolio, but significant risks stemming from additional macro shocks, changes in interest rates, and the whimsy of other investors may make owning high-yield a bumpy ride. 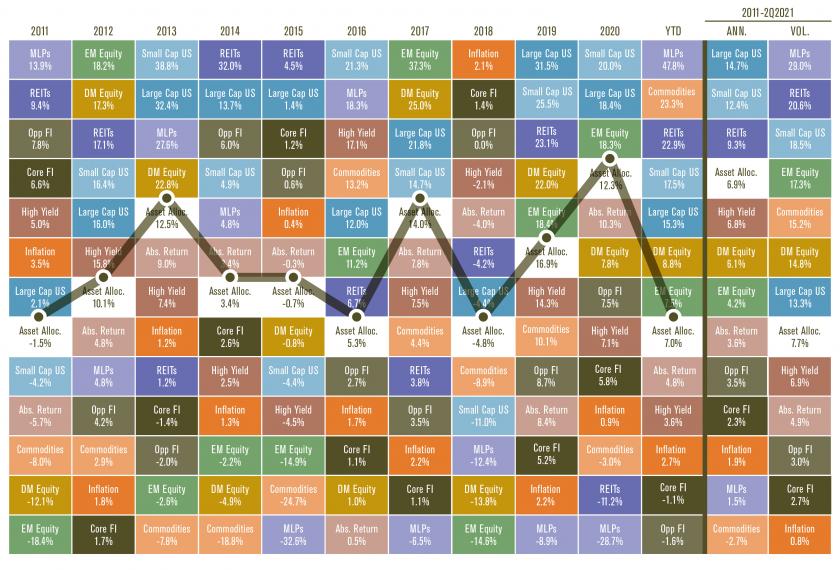