Commentary: Are the Clouds of Uncertainty Clearing?

“Markets hate uncertainty” is the clichéd reason for many stock market declines, but the fact is that the future is always uncertain.1 Stocks have trended higher for decades despite every day being a step into the unknown. The past several weeks have shown us once again that the greater the present angst, the greater the potential for positive surprises—and higher stock prices. 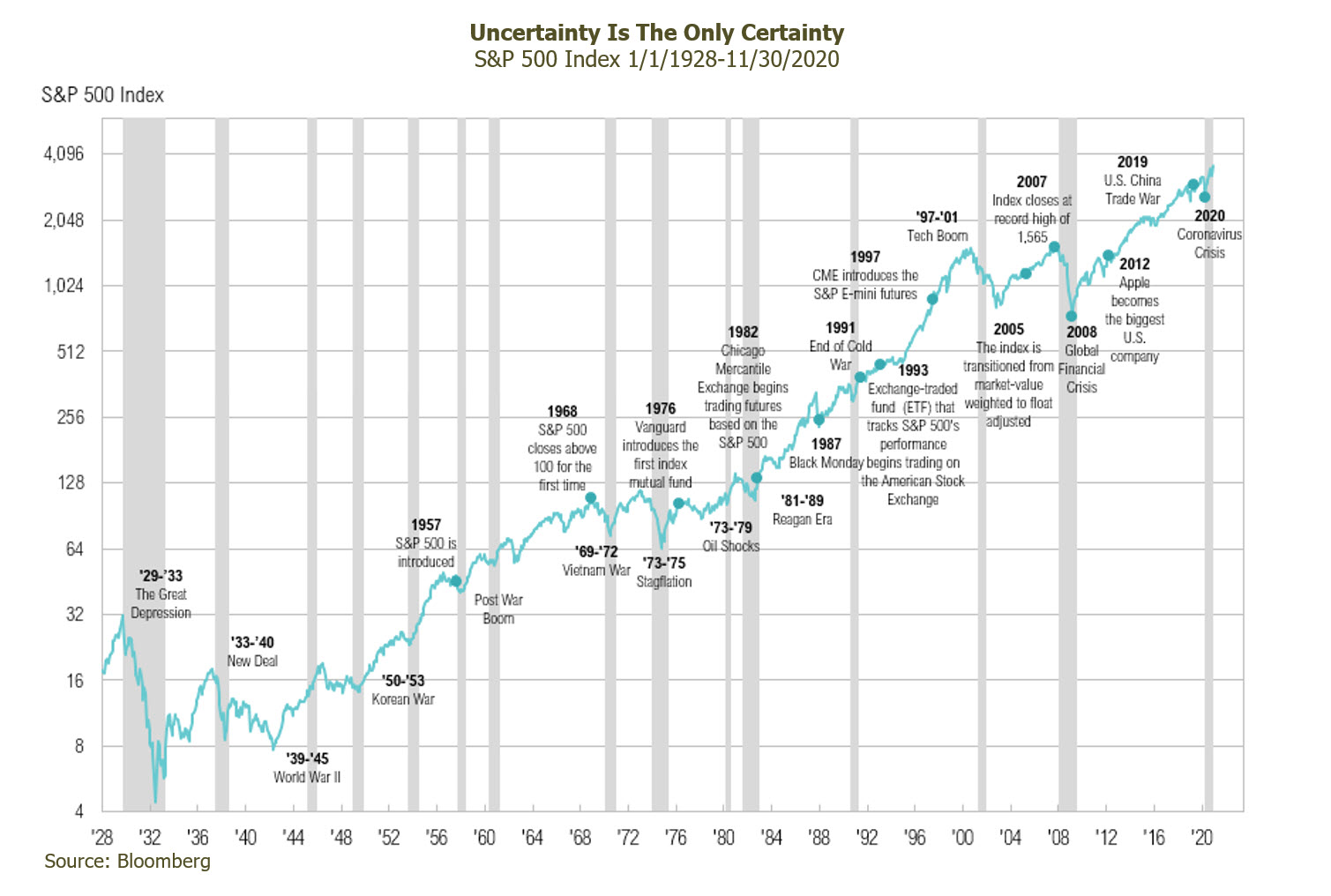 Several clouds that were hanging over the market parted in November, boosting the returns of stocks and high-yield bonds and driving down the performance of perceived safe havens like gold. In particular, news of an impending vaccine sparked hope for a broader economic recovery and improved returns in parts of the market that had been lagging—especially energy, financials, and smaller companies, which often lack the resources of their larger competitors. When Pfizer and BioNTech announced promising vaccine results on November 9, value stocks, as measured by the Russell 3000 Value Index, outperformed growth stocks (Russell 3000 Growth Index) by an impressive single-day spread of 6%. This contributed to the 14% return of the Russell 3000 Value Index in November, marking its best monthly performance on record, which goes back to 1979. Energy stocks were up 28% (down 31% for the year) while financial stocks rose by 17% (down 5% for the year). Small-cap value stocks outperformed large-cap growth stocks by 9% (19% vs. 10%, respectively). That narrows the massive performance gap on a year-to-date basis. For the year, large-cap growth stocks are up 32% while small-cap value stocks are down 3%.

On November 23, Joe Biden announced his intention to nominate former Federal Reserve Chair Janet Yellen as Treasury Secretary. The decision will require Senate approval, but Yellen has broad support from both Wall Street and K Street.2 Any question about Yellen’s intention to accept the role was laid to rest when she announced on Twitter, “As Treasury Secretary, I will work every day towards rebuilding that dream for all.” Yellen is the first woman selected for the role, a welcome theme that is emerging from the Biden-Harris administration. Her appointment will strengthen the already tight bond between the Federal Reserve and Treasury department during a time of record deficit spending as well as record purchases of Treasury debt by the Fed. The Fed continues to purchase approximately $120 billion worth of Treasury and Agency debt each month and recently became the largest holder of U.S. Treasury debt, now holding over 22%.3

On November 24, the General Services Administration (GSA) started the mundane but crucial process of allocating office space, providing data access, and freeing up transition resources for the incoming Biden administration.4 The following week, President Trump announced that he would accept the results of the election if the electoral college voted to remove him on December 14.5 In Congress, recent polling and prediction market data suggest that the most likely outcome in January will be a Democrat-controlled House of Representatives and a Republican-controlled Senate.6 That said, the Senate runoff races in Georgia are heating up, and ad spending alone is expected to reach as much as $500 million dollars, reflecting the importance of the composition of the Senate.7 Recent data suggest investors should keep these races on their radars.

Even amid surging new case numbers and hospitalization data, positive developments have emerged in terms of the pandemic. On November 9, Pfizer and BioNTech announced promising early results from a phase three study of their vaccine candidate, BNT162b2. The initial data suggested the vaccine was 90% effective in reducing COVID-19 cases.8 A week later, Moderna announced similarly hopeful results. From a sample of 30,000 study participants, 185 in the placebo group contracted COVID-19, compared to 11 in the group that received the vaccine. Perhaps even more encouraging, none of the vaccinated candidates developed a serious case of COVID-19.9 Two days later, on November 18, Pfizer announced that its vaccine might be even more effective than early results indicated. Of the 44,000 people enrolled in the study, a total of 170 confirmed cases of COVID-19 were evaluated. Of those, just eight came from the vaccinated group, implying an effectiveness of around 95%.10

Additionally, the number of Americans who are willing to take the vaccine is increasing. According to Gallup data gathered from October 19 to November 1, 58% of Americans would take an FDA-approved vaccine if it were readily available, up from 50% in September.11 Distribution of these vaccines has already begun ahead of the expected FDA Emergency Use Approval (EUA) with as many as 40 million expected to be shipped nationally.12 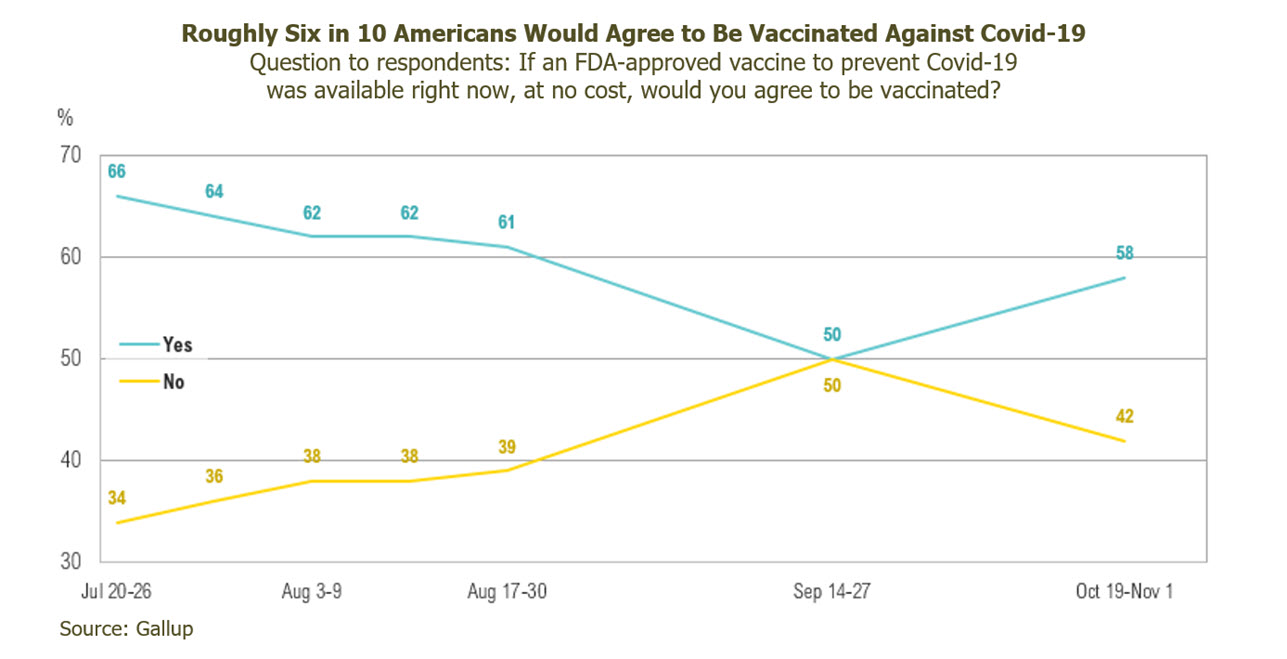 After spiking to nearly 103 in March, the U.S. dollar index has declined by almost 12% to just under 91. At the same time, industrial metal copper, often viewed as a proxy for future growth and inflation, has rallied 64% since the pandemic lows in March. Over the same period, the 10-year U.S. Treasury yield has risen from 51 basis points then to 97 basis points today. Taken together, these moves suggest that investors are anticipating higher growth and inflation—and rightfully so. After all, in an August speech, Jerome Powell announced that the Fed itself is targeting higher inflation.13 From our perspective, several qualitative developments suggest that higher inflation could be on the horizon, including the Fed’s new mandate, Yellen’s appointment to the Treasury, a vaccine, and the market’s tolerance for continued aggressive fiscal and monetary policies. While we do not believe inflation will increase suddenly, we are cognizant that it could move higher from these levels, and we will continue to diligently monitor the relevant developments. We understand that the challenging circumstances this year has brought about can cause uncertainty around what to do with investment portfolios for investors. Given the continued rally in risk assets, RMB believes this is a good time for investors to evaluate exposures in portfolios as the possibility for a pullback increases for those investments. We will continue look for additional opportunities to selectively increase risk, if/when further stock market pullbacks develop. In the meantime, we continue to focus on dislocations in various niche markets that present attractive risk/reward opportunities.

The opinions and analyses expressed in this newsletter are based on RMB Capital Management, LLC’s (“RMB Capital”) research and professional experience, and are expressed as of the date of our mailing of this newsletter. Certain information expressed represents an assessment at a specific point in time and is not intended to be a forecast or guarantee of future results, nor is it intended to speak to any future time periods. RMB Capital makes no warranty or representation, express or implied, nor does RMB Capital accept any liability, with respect to the information and data set forth herein, and RMB Capital specifically disclaims any duty to update any of the information and data contained in this newsletter. The information and data in this newsletter does not constitute legal, tax, accounting, investment or other professional advice. Returns are presented net of fees. An investment cannot be made directly in an index. The index data assumes reinvestment of all income and does not bear fees, taxes, or transaction costs. The investment strategy and types of securities held by the comparison index may be substantially different from the investment strategy and types of securities held by your account. Past performance is not indicative of future results, and there is a risk of loss of all or part of your investment. The S&P 500 Index is widely regarded as the best single gauge of the U.S equity market. It includes 500 leading companies in leading industries of the U.S economy. The S&P 500 focuses on the large cap segment of the market and covers 75% of U.S. equities. The Russell 3000® Value Index measures the performance of the broad value segment of the US equity value universe. It includes those Russell 3000® companies with lower price-to-book ratios and lower forecasted growth values. The Russell 3000® Growth Index measures the performance of the broad growth segment of the US equity universe. It includes those Russell 3000® companies with higher price-to-book ratios and higher forecasted growth values.